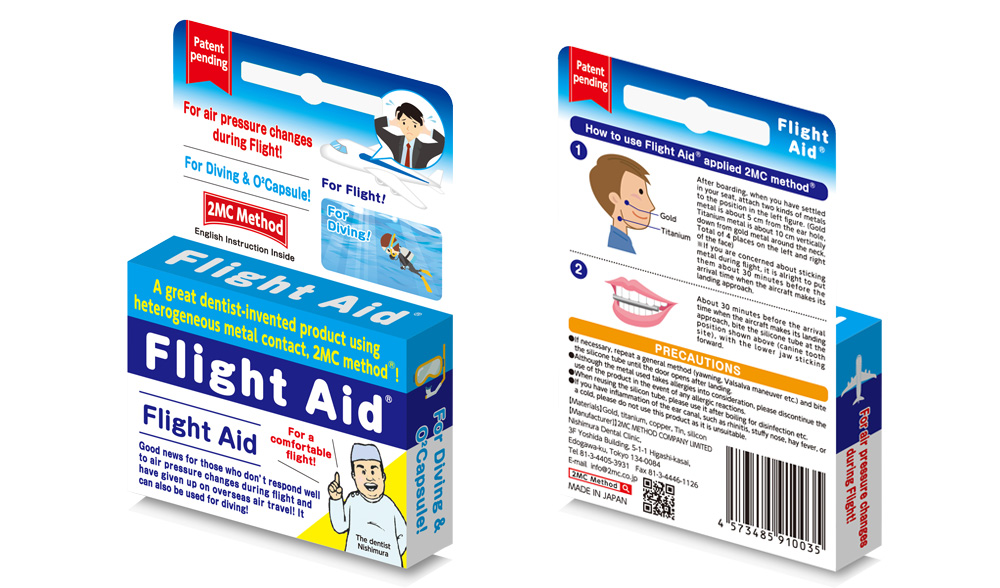 This patent-pending product is the modern revival of the oriental secret therapy, the Two-Metal-Contact method.
This useful product helps people having trouble accommodating changes in air pressure during an airplane's ascent and descent (or changes in water pressure during scuba diving) to make their flight (or diving) enjoyable. Adopting a totally different approach from conventional ones such as ear plugs, Dr. Nishimura, who is a dentist, invented this revolutionary product based on his four decades of clinical experience.

To relieve discomfort in the ears (owing to failed equalization) during airplane flight.

The difference in electrical potentials between two different metals used in Eastern medicine (*Two-Metal-Contact method, see below for details) is utilized. This product increases the qi flow and stimulates pressure points to produce acupuncture effects and relieve the tension around temporomandibular joints to reduce stress on the Eustachian tubes.

(2) Place a silicon tube between upper and lower canines and bite into it while thrusting forth (or extending) the lower jaw.
(* To explain through examples, do it just like a defiant child or the "A-yeen" gesture by Japanese comedian Ken Shimura)

(3) If no ear discomfort is experienced after the airplane becomes stable in cruising, remove the silicon tube. However, the four metal contacts (pellets) should be left attached.

(4) Once the airplane begins its descent and the "fasten seatbelt" sign is turned on, bite into the silicon tube as described in (2).
(Ear-clearing problems most commonly occur owing to the air pressure change during descent, especially in international airplanes, which fly at higher altitudes, resulting in a larger air pressure differential)

Composition of the product to be launched(retail product)

The concept of the 2MC method derives from an Eastern traditional acupuncture technique, "a therapeutic technique with gold and silver needles" (which utilize the difference in electric potential between gold and silver to drive qi, or energy, to circulate in order to relax tendons and facilitate smooth joint movements).

Dr. Masaoki Nishimura graduated from Iwate Medical University School of Dentistry in 1976 and began a private practice, Nishimura Dental Clinic, in Tokyo in 1981. While he works hard to provide his specialty occlusal therapy as a dentist, he has continuously studied various approaches based on the principles developed by Dr. Manaka and Dr. Nakatani. He has been utilizing the 2MC method in his four decades of clinical practice and published an article "2MC Method for Beginners in Eastern Medicine" (Dental Outlook, Vol. 80, No. 5, 1992) in 1992, and another article, "Effects of a Wristband Applying the 2MC Method: Proceedings" (Masaoki Nishimura: the Journal of Japan Dental Society of Oriental Medicine, 1994), in 1994.
Particularly though his practice of specialty occlusal therapy, Dr. Nishimura has observed that the Two-Metal-Contact (2MC) method work effectively to correct the partial (subluxation) or complete (luxation) posterior dislocation of the temporomandibular joint caused by the strained temporomandibular joints and the relaxed posterior belly of the digastric muscle, which leads to a reduction in stress on the Eustachian tube (thus facilitate ear-popping). He has long been using the Two-Metal-Contact (2MC) method as an adjunctive treatment in cases which cannot effectively be treated only by conventional dental medicine such as patients with occlusion problems and TMJ syndromes or during intraoral surgeries.

Recommendation from Mr. Hiroshi Sugie, a former JAL pilot (an aviation critic and a leading expert in preventative measures against aerotitis media)!

[Good news about the prevention of aerotitis media] Quite a few people experience ear pain when an airplane descends, and might further develop severe cases of aerotitis media. Especially Japanese, generally having more susceptible ears, are likely to have a hard time during a flight in a modern airplane with a cabin pressure control system manufactured by Western companies. During an international flight, your ear condition might thus become serious enough to consult a doctor as soon as you arrive at the destination. In such cases, the doctor will tell you not to fly on an airplane for at least 2 to 3 days or sometimes for as long as 1 week, which would not only affect your long-awaited trip or exciting work but also, in some countries, cost you an enormous amount of money in medical bills.
When I was flying an airplane as a pilot, I made my best effort to control the cabin pressure as nicely as possible to prevent such conditions and ensure a pleasant flight. More specifically, for examples of different measures taken, a flight engineer on board made adjustments to reduce the descent rate of cabin altitude and the pilots started descending earlier to take more time to land. However, recently, there are no such flight engineers on board who engage in operating the cabin pressure control system: instead, automated cabin pressure control systems are fitted in now prevailing high-tech airplanes only requiring two pilots. Therefore, if the airplane descends rapidly, the descent rate of cabin altitude also increases rapidly to possibly cause ear pain even in healthy people. In addition, the cruising altitude tends to be elevated to improve fuel economy.
Now it is becoming common that even airplanes for a short-haul domestic flight fly at a high altitudes of ten and some thousands meters. The higher the cruising altitude, the greater the difference between the cabin pressure and the surface pressure. Therefore, particularly during the descent, strong pressure continues to be applied on the Eustachian tubes of our ears. Consequently, young children and people in poor physical condition owing to a cold etc. would experience ear pain.
Furthermore, passengers only have limited measures to prevent ear pain: for example, once the airplane begins descending and they feel a fullness in their ear, they can try sipping water, sucking on hard candy, or yawning to temporarily open the Eustachian tubes. But a product helping us to prevent such pain is now available. It is called "Flight Aid", which you can use in the cabin. Simply, it works in two ways to relax tissues around the Eustachian tubes, and apparently, is the fruit of research by an excellent dentist who has studied the occlusion for 40 years.
When I fly on an airplane as a passenger, anticipating ear pain during the descent, I ask a cabin attendant to bring me a cup of water and sip water as long as I feel stuffiness in my ears. Based on my experience, this works most effectively, but now I also take this "Flight Aid" with me as an additional aid. In fact, I have already tried it during several flights and never had a slightest pain in my ears, which should be evidence of its effectiveness. Isn't this good news for people who experience ear pain during a flight and fear to travel by plane as well as people who frequently have ear pain in daily life?